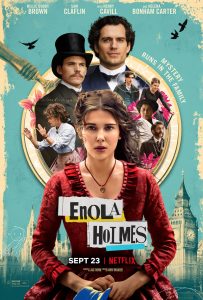 Enola Holmes: Harry Bradbeer’s adventure film has an entertaining story and a winning heroine as the protagonist; the mystery at its center is quite simple, but that doesn’t reduce its fun factor. The eponymous character is an engaging, smart, dynamic, resourceful young woman who wants to find her own place in the world; in other words, a very whole example of female empowerment. In that sense, her famous surname is irrelevant and the original character traits or deductive powers are barely used. In fact, other than name recognition (in the film and for the film), there’s no reason it could not have been Watson, Lestrade, Freud, or Smith. Furthermore, the film is a bit heavy-handed and obvious when defending its worthy ideas. Millie Bobby Brown is quite good as the plucky protagonist. Nobody else in the cast is as interesting, but they aren’t asked much either: Henry Cavill just has to smile brightly and nod knowingly as the protagonist’s most famous brother, while Sam Claflin simply sounds arrogant and annoying as her second-most famous brother. The film looks good, from Consolata Boyle’s costumes to Michael Carlin’s production design, all punctuated by the smart editing of Adam Bosman. Daniel Pemberton’s musical score is a good fit for the adventure genre.