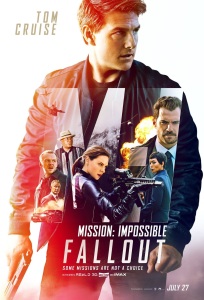 Mission: Impossible – Fallout: Christopher McQuarrie new entry to the action franchise, the best in the screens today, carries on the usual plot with many moving (and shady) parts, but also manages to flesh out the main character deeper than it had done before. The plot has space both for action set pieces (a staple for the film series) and quieter con game scenes (a nod to the original television series); the light tone also shows the film doesn’t take itself too seriously. The action sequences are varied (hand-to-hand combat, gunfights, chases, jumps, to name a few) and exhilarating; in part, because they are showy, dangerous-looking and extremely well executed (the film is well-shot by director of photography Rob Hardy, and the editing of Eddie Hamilton is, in a word, fantastic; both give the action great clarity). More importantly, however, their stakes are increasingly less general and more personal; that gives them a lot of weight. Tom Cruise perfectly sells the earnest goodness of his character, and equally so his physical skills (his stunts are very impressive); Rebecca Ferguson, Ving Rhames and Simon Pegg are very good in their returns; Henry Cavill is also a solid presence, due to his impressive physicality; Vanessa Kirby is also fine, channeling a certain character from early in the series. Lorne Balfe’s musical score makes good use of Lalo Schifrin’s recognizable themes.