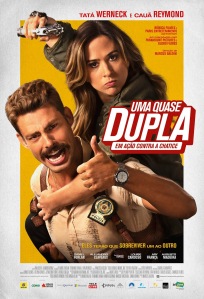 Uma Quase Dupla: mismatched buddy-cop movies are practically a genre unto itself, and when one chooses to focus on the comedic aspects, the least that can be expected is that it’s funny. Such could not be further from the truth in Marcus Baldini’s film; it’s not because it’s not trying, but because it tries too hard. The comedy is deeply unfunny, and drowns anything that could make either the mystery (which is shallow and stupid in its resolution) or character development work. Tatá Werneck doesn’t have a character to play, just a couple of failed jokes, and compensates with an excessively broad and annoying performance. Cauã Reymond fares a tad better, because the writing gives him a character; it’s one-note, but allows for some sympathy. The film is cleanly shot and edited, but there’s some cheapness in the special effects and special make-up.