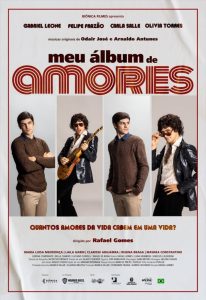 Family Album: Rafael Gomes’ lovely musical dramedy follows the story of a young man on a journey of self-discovery; no wonder, as he is dumped by his long-time girlfriend the same week he finds out his real father is not who he thinks he is. His journey is messier than most, but the sense of loss (about who he is, his career, and his love life) he feels is very relatable. Throw in a healthy dose of old-school romantic pop music, and the whole is quite entertaining. Gabriel Leone plays the protagonist with great charm, from his heartbroken moments to when his self-respect is regained; he also plays his father, mostly in music videos, where his singing voice proves to be very adequate to the material. Felipe Frazão is quite good as his newly discovered half-brother. Production designer Glauce Queiroz effectively conjures a house that throws back to the 1970s; cinematographer Jacob Solitrenick captures it all nicely. Editor Helena Chaves (alongside, one assumes, the three writers) gives the film a nice structure. The original songs, by Odair José and Arnaldo Antunes, are a doozy.