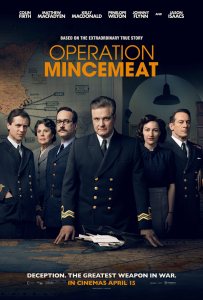 Operation Mincemeat: as is often the case, reality has a way of upstaging fiction with stories that sound too preposterous to be true. John Madden’s film tells one such story, an operation in World War II aiming to fool the Axis and improve the chances of success of a planned invasion. It is efficient and certainly more than a bit square, but not overly stuffy. There are some detours from the main story which are somewhat superficial, but they serve the purpose of not having a pure procedural. Acting is very British, contained and proper: Colin Firth and Matthew Macfadyen are smooth and debonair as the two masterminds of the operation; Kelly Macdonald and Penelope Wilton, as their important collaborators, are effective; Johnny Flynn is charming as a certain writer involved in the operation. The film looks polished and elegant, particularly the convincing costume design by Andrea Flesch, who reconstructs the uniforms and garments of the era.