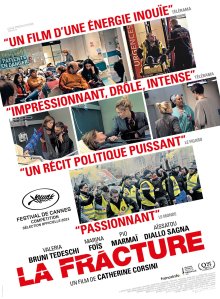 The Divide: Catherine Corsini’s film starts with levity, as one of the protagonists is a bit of a clown, but it gets really intense and hard-hitting as it moves along. The primary setting is very specific, a public hospital in Paris during the 2018 protests, but after a couple of years of a pandemic, there is something very recognizable about overworked healthcare professionals. The film feels longer than its runtime, in a good way, as the three different storytelling nuclei (family drama, the protesters, the hospital staff) come crashing in a single location. Valeria Bruni Tedeschi plays well the comical relief of the film, a needy woman who is even less reasonable than usual due to the pain she is under; Marina Foïs plays her wife effectively. Pio Marmaï, as a wounded protester, is pretty good as well. The film, in any case, belongs to Aïssatou Diallo Sagna, who plays the overworked but caring doctor in an almost impossible situation. Solid cinematography by Jeanne Lapoirie, editing by Frédéric Baillehaiche , and musical score by Rob.