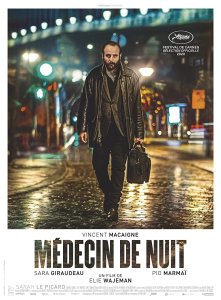 The Night Doctor: Elie Wajeman’s taut film takes place over the course of one night when a man tries to bring his life back on track and correct his many, mostly unforced, errors. The protagonist is an interesting character, a man who loves his job and tries to do good, but also is clearly flawed on many fronts. Vincent Macaigne gives a good performance as this complicated man. Sarah Le Picard, as his wife, and Sara Giraudeau, as his lover, do what is possible with somewhat thankless roles. Pio Marmaï, playing his cousin, is rather sleazy. The film’s look gives it a sense of urgency, with cinematographer David Chizallet capturing a nighttime Paris that is not like what Paris usually looks like; his images are nervous, close to the protagonist. Editors Beatrice Herminie and Benjamin Weill give it a quick pace. The music, by Evgueni and Sacha Galperine, is minimalist, a good fit.