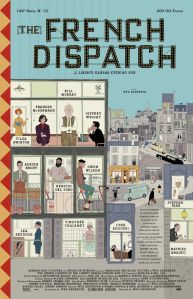 The French Dispatch: it may seem, at first glance, an opposition of terms to have Wes Anderson, who is such a visual artist, come up with a love letter to the written word; nevertheless, the end result is entertaining, insightful, touching. The film emulates the structure of a magazine: the main three stories are unrelated, barely connected by the overarching narrative; but they are all quite nice to watch individually. The cast is gigantic, even if most of them amount to little more than cameos; the performances can be off-putting (as most artistic choices in Anderson’s films can be), due to their low key. The stand-out is Jeffrey Wright as one of the star journalists; he is also given the best text to read as the narrator of his story. It’s hard to pick another name out of the smorgasbord of good performers giving good performances; they are all deserving.

Aesthetically, this film is as meticulous as ever: he mixes aspect ratios, color with black-and-white, animation (beautifully done with a style that reminds of Hergé) with live-action. Director of photography Robert Yeoman both frames and moves the camera with elegant precision. The work of both production designer Adam Stockhausen and costume designer Milena Canonero is varied and attractive. The use of music is exquisite, both Alexandre Desplat’s original score and pre-existing tracks.