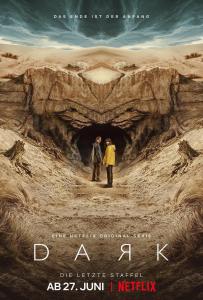 Dark – Season 3: what is more impressive in Jantje Friese and Baran bo Odar’s kaleidoscopic series as a whole is that they seem to know, from the first moment, what every second of the series was going to be. The resulting tightness and consistency is, alas, not as frequent in long-form storytelling as it should be, in particular for a story this complex.

If the first two seasons introduce and show the design and inner workings of an endless Gordian knot, the third and final season introduces new strands, meshes them into the original design, and then introduces yet another concept. It is an intricate narrative that never gets murky; there is a multitude of narratives, but the visual codes used make very clear, at all times, when and where the characters are (thanks to the directorial choices of bo Odar, the work of the editing team, the production design of Udo Kramer, and the costume design of Anette Guther, the cinematography of Nikolaus Summerer).

Yet, it would all be for nothing if the series didn’t allow for an emotional connection with the characters, but as emotion is the driving force for most of the agendas, it gets easier and easier to care for the two main characters and the universe they live in. The series as a whole is quite a journey and this season lands quite beautifully.

Acting is intense: Lisa Vicari (whose character gains a lot of agency this time around) and Louis Hofmann go through a lot, convincingly, and form a nice couple; Mark Waschke, who has a great voice and physical presence, is a nice villain. The casting is as precise as everything else: with a multitude of characters having a multitude of ages, there is never a combination that feels wrong.

Below the line, the sound design also deserves to be mentioned, as the music of Ben Frost, the use of pre-existing songs, and the sound effects very effectively help set the mood.