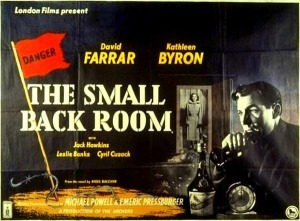 The Small Back Room: this film, by Michael Powell and Emeric Pressburger, mixes a wartime thriller, an inter-office political drama, and a romance; it is quite effective because each informs the other. The protagonist is a clearly troubled but talented and honest man, playing a game where the stakes are impossibly high, and his reliance on his lover to remain functional is touching. They are well-defended, respectively, by David Farrar and Kathleen Byron, who creates a sympathetic but nevertheless tough-as-nails secretary. Jack Hawkins, Geoffrey Keen, and an uncredited Robert Morley create a few memorably slimy and inefficient bureaucrats. Editor Clifford Turner gives the film a good pace and creates a nail-biting climatic sequence. Cinematographer Christopher Challis shoots it all very effectively, beautifully re-framing the images often as the scenes develop.