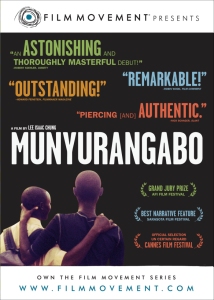 Munyurangabo: Lee Isaac Chung chronicles the journey of two friends through Rwanda with a documentary-like eye; the film is observant, ponderous, humane, and poetic. Those two are essentially the opposite of one another: one is Hutu, the other Tutsi; one is an orphan, the other a runaway from his family; one intends to destroy, the other to rebuild. Since the film uses non-professional actors, the acting is very uneven: probably the most consistent is Eric Ndorunkundiye, as the protagonist who sideroads the journey to visit his family and try to win back their approval; Josef Rutagengwa, as his best friend, holds on to his intent a bit too strongly, and doesn’t offer any nuance to the character. Jean Marie Vianney Nkurikiyinka, who plays the father of the first boy, is a crucial character, but his acting alas is not up to it. The images, shot by Chung himself, project beauty, serenity, restraint.