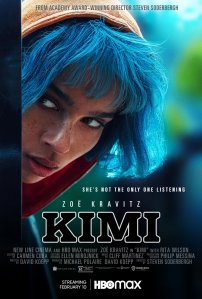 Kimi: Steven Soderbergh (and writer David Koepp) drinks from many recognizable sources for this thriller, then updates them to times of pandemic, #MeToo, and high-tech, and turns them a bit in their ear. It doesn’t waste any time trying to be something else, so its clichés are balanced by how tight it is. Zoë Kravitz, who plays the heroine, builds a character clearly capable and strong but traumatized. The rest of the cast is capable, but without much to do, as most characters are there merely to advance the story. The protagonist’s apartment, maybe unrealistically so, is wonderful, a nice creation by production designer Philip Messina. Cinematographer “Peter Andrews” (AKA Soderbergh himself) captures it nicely, and alongside editor “Mary Ann Bernard” (also Soderbergh under a pseudonym), effectively represents visually the distress of being outside again for the main character, and also keeps the whole very quick and snappy.