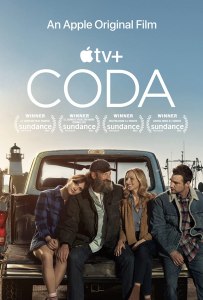 CODA: Siân Heder’s drama takes a somewhat traditional blueprint, that of a teenager in conflict with their family, and turns it up to eleven. As the issue goes beyond lack of communication, instead being the true inability to appreciate what the other loves to do, the drama is raised, and the film is very effective in tugging the heartstrings. It helps that the family in question is so engaging: their deafness is no impediment to a normal, happy life, and that their quibbles with each other dwarf their mutual love. Emilia Jones, as the protagonist, is a find: she acts convincingly both in English and in American Sign Language, has a beautiful singing voice, and is charming. Marlee Matlin and Daniel Durant are quite good as her mother and brother. Eugenio Derbez is funny as the teacher that inspires her. But out of the supporting cast, it is Troy Kotsur, as her colorful father, who comes out with the most accomplished performance. Aesthetically, the film is unadorned and very effective.