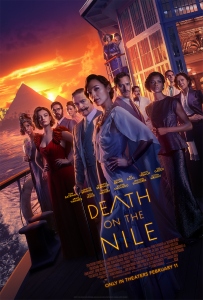 Death on the Nile: Kenneth Branagh’s adaptation of Agatha Christie’s famous whodunit is, for better or for worse, a known quantity. It is entertaining and properly mysterious, but it also feels a bit too close to the beaten track. It is a large and interesting cast, but most of them don’t really get the chance to play much with their characters, as those don’t evolve much. Branagh himself, who plays the famous detective, is the main exception, particularly now the character gets a bit mode backstory on top of his usual color. Sophie Okonedo, playing a famous blues singer, and Annette Bening, an invited matriarch, are also able to create something with their small airtime. Cinematographer Haris Zambarloukos shoots the action in a very elegant manner, moving the camera beautifully. Production designer Jim Clay creates an attractive and opulent world. Costume designers Paco Delgado and JobanJit Singh create a few impressive gowns. The idea to have a few blues complementing Patrick Doyle’s musical score may seem an odd choice, but it proves to be a really interesting one.