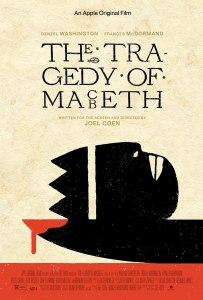 The Tragedy of Macbeth: a few centuries after William Shakespeare wrote it and a large number of performances and versions later, it is safe to say that the story and text of the Scottish play are exceptional. The trick is how to tell them, and director Joel Coen chose to be very spare with the sets, which raises its sinister tone. Production designer Stefan Dechant presents minimalist sets which do not sacrifice beauty and allow for very rich staging of the actors; it is all captured in lustrous, elegant black and white by cinematographer Bruno Delbonnel, who also makes great use of dynamic lighting to raise the drama even further. Carter Burwell’s score fits the material perfectly. But all that is for naught if the performances aren’t up to the text, and here they absolutely are: Denzel Washington and Frances McDormand’s descent into madness (driven by their ambition and guilt) is palpable, and they deliver the dialogue as if they were born speaking in that cadence. Alex Hassell’s delivery is not so smooth, but he is a very sinister presence nevertheless. Kathryn Hunter is beyond creepy as the Witches.