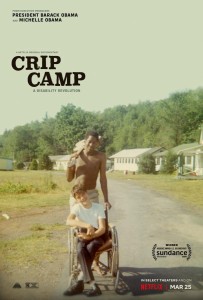 Crip Camp: this documentary, by Nicole Newnham and James Lebrecht, is a good reminder that the fight for civil rights encompasses many minorities. The journey of the many subjects of this film included seeing themselves as part of a group (in spite of the many different disabilities they have) and in that sense, the summer camp is a focal point in what would come later. The fight for the rights of people with disabilities should be a no-brainer, and still, the extent to which they had to go to get those rights is mind-boggling. This is a very powerful film, inspiring in many ways. It is very efficient, if traditional, in its narrative; the editors use a wealth of archival footage and stitch it all together with recently recorded interviews. The many songs used in the film are a great addition, complementing the very engaging experience.