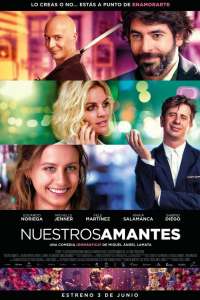 Our Lovers: Miguel Ángel Lamata romantic comedy deconstructs the meet-cute where his protagonists are introduced to each other and to the audience; this is done as they open up in long, entertaining dialogues (which is bookish enough to help define the characters). The genre is generally vacuous, and this one is no different, but it’s also lots of fun. Rom-coms live and die by how charming the protagonists are; Michelle Jenner’s smiles brights up a room and she projects nicely the range of emotions of her character, while Eduardo Noriega disheveled looks match his emotional state; they have plenty of chemistry together. The film’s setting, a dreamy depiction of Zaragoza that includes both traditional architecture and hip new places, adds to the general charm of the film, as it’s very livelily captured by the ever-moving camera work of cinematographer Fran Fernández Pardo.