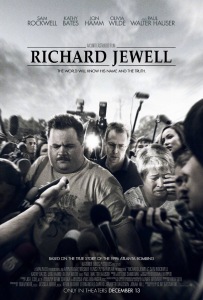 Richard Jewell: the story of the eponymous character in Clint Eastwood’s drama seems very strong on paper, but the crux of the story (the justification behind the persecution of an innocent man) is so unconvincing, everything else falls like a castle or cards after that. It doesn’t help that the two main antagonists are insultingly badly written. (It’s hard to not give in to cynicism and wonder why Eastwood decided to tell this story, one that attacks the FBI and the media while subtly defending the NRA, at this particular juncture.) If the film has something that stands out, it’s Paul Walter Hauser’s performance as the title character; he is great as the somewhat slow and awkward man, which makes him the perfect target for a false accusation. Kathy Bates and Sam Rockwell are OK as the worried mother and combative lawyer, respectively (their characters don’t go much deeper than this). Olivia Wilde and Jon Hamm can’t do much with their shallow antagonists. The film is finely but unmemorably crafted.