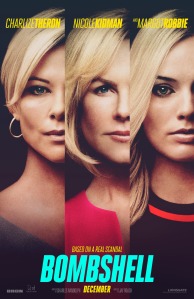 Bombshell: Jay Roach tells the important story of the serial sexual harassments within Fox News (and the following efforts to expose, cover-up, and excuse) as a solid procedural; as such, while the plot is well-told, there’s not much sense of the characters involved. There are a lot of characters, and the cast is filled with great faces, even in the quasi-walk-on roles. The central performances are all solid (and greatly helped by the exceptional make-up work): Charlize Theron and Nicole Kidman are not given much of an arch to play with, but create (or emulate) distinctive speech patterns and physical posture; they play powerful women in control, so emotional outbursts are more subtle. It is, however, Margot Robbie that comes up ahead, helped by a complete, proper journey that gives her a greater range to play with. Cinematographer Barry Ackroyd shot this film in a way that gives it a great sense of urgency, which is enhanced by the editing of Jon Poll.