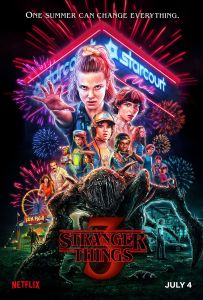 Stranger Things – Season 3: the third season of the Duffer Brothers’ series is even more preposterous than before (if that is possible, considering the original concept includes monsters from a parallel dimension and psionic powers), as it grows to include even more typical elements from the 1980s. That’s not to say that the series is not as entertaining and involving as ever. The Duffers prove again to be able to grow the group of characters, and therefore the web of relationships, with interesting specimens. The downside, however, is that as the number of characters grows, also does the need to break down them into smaller groups so things won’t get too unwieldy. The kids (Millie Bobby Brown, Sadie Sink, Finn Wolfhard, Noah Schnapp, Gaten Matarazzo, Caleb McLaughlin) remain utterly charming, even as they grow up. Priah Ferguson is almost too sassy, but her expanded presence is most welcome. Maya Hawke is a fine addition too, another female strong character. Winona Ryder cranks up the comedic side in her interactions with David Harbour, this time around.

This season is gorier than the previous, generally less moody, but every bit as scary. Special effects are more crucial this season, and they are very well-done. Set design and costume design are both very good at recreating the time period, and the cinematographers capture the colors and neon lights nicely. Kyle Dixon and Michael Stein’s original musical score, alongside the use of licensed songs of the time (including a hilarious showstopper performed by the cast) are a great asset.