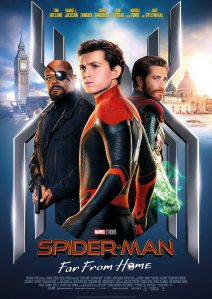 Spider-Man: Far from Home: Jon Watts’ film makes good use of this title character’s main asset: his vulnerabilities and insecurities as a teenager inserted in an adults’ world. The heroic side of the story is fluffy and inconsequential, but entertaining; it also includes a couple of instances of heavy and somewhat inept exposition, partly needed to insert this entry in the cinematic universe. The villain has interesting powers, which are minor enough to be a good fit for the hero. Tom Holland proves to have been a great choice for the role, as he has the right physique du rôle and projects all the doubts of his character. Jake Gyllenhaal is a fine addition, managing well his arch. Zendaya is a charming and smart presence; Jacob Batalon and Tony Revolori, good comic fodder. Cinematographer Matthew J. Lloyd, alongside the special effects team, presents a fluid camerawork that is a great fit to the material.