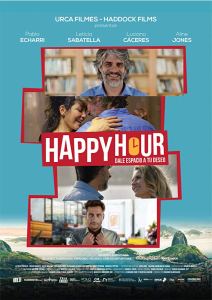 Happy Hour: Eduardo Albergaria introduces so many extraneous elements to the film, all of which get in the way of the promising premise. Some of them feel like leftovers from plots never explored, some are there just to be precious, but they add nothing to the characters or to the mood of the film. Instead, they just drag the pace of the film and distract from some interesting themes that the film presents. Letícia Sabatella and Pablo Echarri form a nice central couple; he is given more to do that she is, and gives a nice, slightly clown-ish performance; she is mostly asked to look good and a bit annoyed, which she does. Likewise, Aline Jones is asked to look as the enticing object of some male gaze, and she delivers. The film looks polished but far from memorable. Dario Eskenazi’s musical score is quite good, with hints of Argentinean sounds.