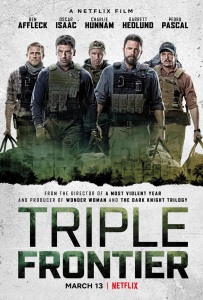 Triple Frontier: J.C. Chandor’s film, paraphrasing a line of dialogue, simply doesn’t have its priorities in the right places. As a character study and commentary on greed, it is shallow and simplistic; the characters are almost undistinguishable (except, of course, by the very recognizable and distinguishable stars that play them), uninteresting and hard to care for (even if they are set up against some very bad men). As an action film, the action sequences are short but dull and thrill-less. As a heist film, its plan is too simple and clearly flawed As a geography lesson, it’s a misnomer, since the region known as the Triple Frontier is not the one where the action takes place. Acting is, for the most part, OK: Oscar Isaac, Charlie Hunnam, Garrett Hedlund, and Pedro Pascal are typically macho; Ben Affleck, however, is excessively morose with his performance. The film’s variety of location types is welcome, competently captured by cinematographer Roman Vasyanov.