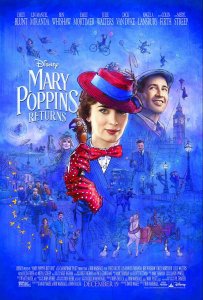 Mary Poppins Returns: Rob Marshall’s sequel is unabashedly old-fashioned, but that proves to be the right decision, as it emulates quite well the spirit of the original film, feeling like a proper sequel (54 years after the fact) and not a reimagination. What it may lack in originality, it makes up with copious amount of magic and joy. If the story is so heart-warming, it’s because of the small but crucial participation of Ben Whishaw; it’s his sad eyes and smile that invite the emotional connection with him and his family as they face their plight. Also inspired is the casting of Emily Blunt (who has a nice singing voice, looks great for the part, and is able to project both the sternness and sweetness of the character, with a lovely mischievous smile to boot) and Lin-Manuel Miranda (who also can sing rather well, and seems to have an innate goodness to him); the kids (Pixie Davies, Nathanael Saleh and Joel Dawson) avoid the excessive cuteness that sometimes plague children’s acting. The musical numbers are visually varied and upbeat (even if the songs themselves, for the most part, are not all that memorable). Director of photography Dion Beebe captures beautifully the gorgeous, colorful production design of John Myhre and the costumes of Sandy Powell; the animated sequences fit quite well.