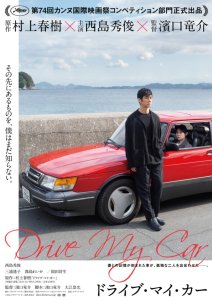 Drive My Car: Hamaguchi Ryusuke’s drama, as it tells the story of a theater director staging a new version of Chekhov’s Uncle Vanya, takes a look at the inter-relationship between art (particularly acting) and grieving. It weaves beautifully the play with the story, with one commenting on the other; it is a very savvy, rich piece of writing by the director and Oe Takamasa, and it rewards the patience it asks for. The acting is quite good: Nishijima Hidetoshi, as the protagonist, gives a layered performance, as a man with a complicated relationship with his own past; Miura Tooko, as his young driver, is fine, giving her character an edge; Park Yu-rim gives a silent and winning performance as a mute actress. The film is aesthetically simple and effective, as cinematography (by Shinomiya Hidetoshi), music (by Ishibashi Eiko), and editing (by Yamazaki Azusa) do the most to tell the story well and the least to distract.