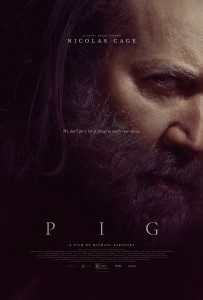 Pig: centered around a cipher of a character, Michael Sarnoski’s film is hard to connect to. The protagonist’s goal is very clear (and there is nothing wrong with trying to recover a beloved pet), but for the longest time the character is nothing but that goal; even when the reveals come, slowly trickling as they do, are not much help all that much. In any case, the film is surprising for not trekking some paths. Nicolas Cage is fine as the single-minded hermit who clearly hides a lot; in any case, he holds his cards so close to his chest that there isn’t much to get out of his performance. Alex Wolff is OK as his sidekick. Director of photography Pat Scola conjures a set of painterly images which are very beautiful, but his occasional use of a handheld camera doesn’t fit the material or the rest of the film. Editor Brett W. Bachman gives the film a brisk pace.