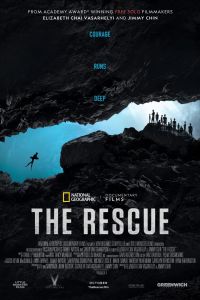 The Rescue: Elizabeth Chai Vasarhelyi and Jimmy Chin’s documentary about the rescue of a group of Thai boys from a flooded cave touches upon two important ideas: that what seems impossible may not be so, and that no effort should be spared to save a life (this second one particularly missing in some circles during pandemic times). The directors, alongside editor Bob Eisenhardt, are able to keep the tension up even for those that followed the event in real-time, without ever losing sight of also keeping it very informative. The editing mixes footage from the time, media reports, reenactment, and interviews, creating a solid narrative thread that packs an emotional punch. The rescue effort was mammoth, and the film focuses on a handful of the cave divers that were more directly involved with its final stages. They are, of course, uniquely skilled people, and the film does some effort to show what makes them tick.