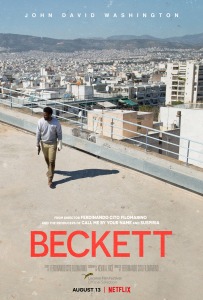 Beckett: to say that the plot of Ferdinando Cito Filomarino’s thriller is outlandish is quite an understatement: nothing makes much sense and, with head-scratching consistency, if a character (any character) has a choice, they will always make the worst possible one. The cast sleepwalks through the film: John David Washington, as the dull protagonist, has no chemistry in his scenes with Alicia Vikander and no agency in general; of course, it doesn’t help his performance that it’s an unconvincing character thrown in an unconvincing scenario. It may be just a minor silver lining, but the film has an old-school sensibility to its aesthetics, as the director of photography Sayombhu Mukdeeprom captures the seldomly seen locations with panache and grittiness; composer Ryuichi Sakamoto contributes with a minimalist, eerie, and grim musical score.