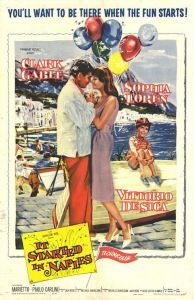 It Started in Naples: there is a certain charm in the idea of pairing Clark Gable (past his prime) with Sophia Loren (certainly not past her prime). However, the protagonist of Melville Shavelson’s romantic dramedy (if that sounds mushy, it’s because it is) is so contemptuous with everything foreign that it’s hard to not hope he would just return home and let the film follow the locals instead. Assuming, that is, that he took the film’s condescending attitude with him. Loren and Gable’s performances are reasonably charming and young Marietto is very fine, but the supporting cast is annoyingly hamming in their Italian-ness. The film certainly looks good, with Roland Anderson and Hal Pereira’s art direction very much on-point. The music, both Alessandro Cicognini and Carlo Savina’s score and the songs, add to the film aesthetic appeal.