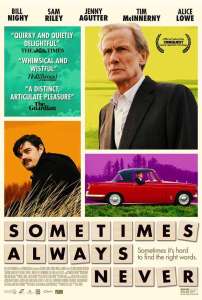 Sometimes Always Never: quite a lot of Carl Hunter’s little drama is stylized: its aesthetics, the quirks of the characters, their main hobby, the lightly comic dialogue. The pain, however, is palpable: that of the patriarch haunted by the disappearance of his eldest; that of his youngest, who gets relegated to irrelevance just because he’s actually there. They are both damaged characters, who know a lot of words but seem to have no idea how to use them. Bill Nighy, as the father, plays it very quiet and straight; Sam Riley is gentle, eternally patient, and hopeful; it’s a fine pair of moving performances, complemented by the supporting cast working in the same quiet key. The distinctive visuals of the film start with the colorful production design, by Tim Dickel, captured by the camerawork of cinematographer Richard Stoddard.