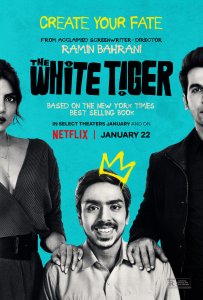 The White Tiger: characters that are not black or white, but presented in some shade of grey, are generally more interesting, but some effort needs to be put into it. Ramin Bahrani’s film doesn’t, really; the tale of amoral characters navigating in a poor society feels stale, even if the specific look into Indian class politics gives the film some sheen of novelty for non-Indian audiences. The protagonist’s brand of ambition has been seen before and he doesn’t bring much new to the table, nor is he sympathetic; the supporting characters are even less sympathetic than he is and less interesting to boot. That said, Adarsh Gourav gives a good performance, as the driver with a constant smile that never extends to his eyes and floats between servile and creepy; Priyanka Chopra Jonas and Rajkummar Rao are efficient as his employers. The film is well-shot by the director of photography Paolo Carnera, who captures the misery and opulence equally, but the editing of Bahrani and Tim Streeto (or its flashback narrative device) can’t shake the feeling the film is overlong.