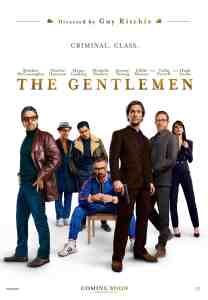 The Gentlemen: Guy Ritchie has made a career of British gangster films with colorful characters. This one is mostly British, and it certainly deals with gangsters, but the colorful characters are harder to find; in that sense, it is a washed-out copy of his own past work. The film has a non-linear structure filled with head fakes and a multitude of factions jockeying for position, but even that is a bit tired. It sports a fine cast: Matthew McConaughey is OK as the hard, emotionless head honcho, a character hard to care for; so is Charlie Hunnam, as his efficient underling. The two castmembers who are having more leeway and fun, however, are Colin Farrell and Hugh Grant, the former as a coach that gets unwillingly involved with the heavy-hitter criminals, and the latter as a sleazy PI looking out for number one; Grant is indeed very funny. The costumes, designed by Michael Wilkinson, are instrumental in defining the characters.