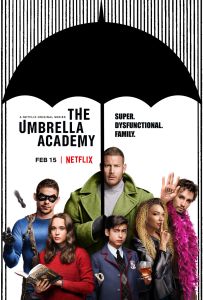 The Umbrella Academy – Season 1 & Season 2: more than the fights against wicked forces of injustice, what truly makes or breaks the story of a group of super-heroes is the web of relationships between the members. This series, created and developed by Steve Blackman and Jeremy Slater (based on the comics by Gerard Way and Gabriel Bá), runs with that idea, making the group a dysfunctional family. They are a feisty bunch and at first somewhat annoying individually, but as the story evolves, the characters and their relationships are explored, so the group as a whole gets more endearing.

The use of time travel as a plot device gives both seasons a ticking clock and a clear idea of the high stakes at play; the downside is that it can be used too often as a soft reset button. It’s better not to think too much about it, as some lack of consistency may become evident. The first season deals with them finding each other emotionally, while the second deals mostly with the physical search, but the formation of the group is always front and center.

The characters are comic-book simple, but their motivations, traumas, and issues with each other get all very clear as the series evolve. The performances are all adequate for the genre: Ellen Page is quite good as the sullen sister, and she does a lot with her posture. Emmy Raver-Lampman is sweet, strong, with a dark streak. Aidan Gallagher is quite good as the arrogant man-in-a-child’s body. The series is also quite generous with the supporting characters, giving them plenty of time to shine; Cameron Britton as the sensitive assassin in the first season may be the best of them.

As a whole, the series is well done, with competent cinematography and editing that is capable of keeping track of all the characters and their comings and goings. It makes very good use of music, even going out of its way to have a pop song or another at every opportunity. Only a few of those are misses, but the selection is stronger in the first season. 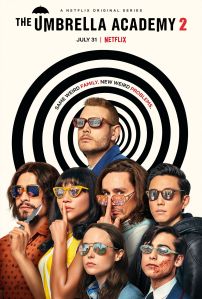