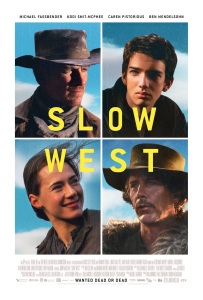 Slow West: it is an unusual Western that John Maclean brought to life; there is a general oddity to its characters and environment that are hard to grasp, but some traditional genre elements (how violence is readily accepted, for instance) are present. It all starts with the naïve and clear-faced young protagonist and his idealized quest, both of which are easily relatable, no matter how dry the proceedings. Kodi Smit-McPhee is a great choice for the role, projecting the innocence but also the perseverance; likewise, Caren Pistorius is convincing as his love interest. Michael Fassbender and Ben Mendelsohn (in a quieter key than usual) are fine in their roles. Cinematographer Robbie Ryan captures the beautiful locations nicely, giving it a dream-like quality that fits the film’s tone; composer Jed Kurzel’s musical score. Editors Roland Gallois and Jon Gregory give the film a tight, precise pace.