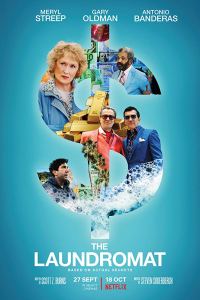 The Laundromat: in spite of keeping the tongue firmly in cheek from beginning to end, Steven Soderbergh is, more than telling a story, building a case against shell companies and fiscal havens. The result is informative, compelling and, above all, very entertaining. The fun starts with the episodic structure being commented by two characters; edited by “Mary Ann Bernard” (meaning, Soderbergh himself), the film is tight and, for the most part, fast-moving. The looks of the film are exaggerated, assumedly artificial; the film is shot with pizzazz by cinematographer “Peter Andrews”. (Again, Soderbergh. His habit of pseudonyms adds an in-joke to a film about shell companies.) The cast is in on it: Antonio Banderas and Gary Oldman (sporting a heavy accent) as the sleazy and smooth master of ceremonies are a riot; Meryl Streep, as the emotional core (and more), is great as usual. The supporting roles, no matter how small, are also filled with recognizable faces (James Cromwell, Robert Patrick, Jeffrey Wright, Sharon Stone, to name a few), all leaving their mark.