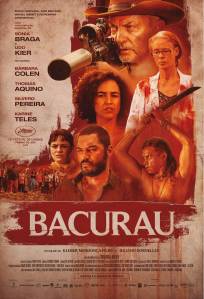 Bacurau: it is a muscular genre film presented by co-directors Kleber Mendonça Filho and Juliano Dornelles; it is, in spirit, a Western, in the sense it portrays a community’s struggle to survive against bloodthirsty powerful men. Of course, the unusual setting and period make this a very unique and interesting to watch combination. There is not a strong sense of character; in fact, the community as a whole, which gives this film its title, is better developed than each of its singular pieces. It doesn’t help that so much time is devoted to the villains, who are not compelling either as a group or as individuals. The acting in that nucleus is particularly suspect, from veteran Udo Kier and the younger performers as well. The “locals” (which include Barbara Colen, Sônia Braga, and Thomas Aquino, among other) fare much better, less histrionic. The film is nicely shot by cinematographer Pedro Sotero, who captures the landscape beautifully. The film as a whole looks good, with one exception: the aftermath of violence, and there is plenty of it, usually looks a bit fake.