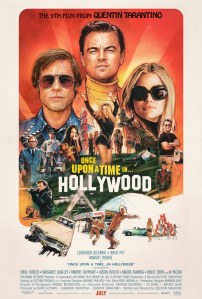 Once Upon a Time… In Hollywood: a bit disconcerting in its lack of a strong plot, Quentin Tarantino’s film is a heartfelt love letter to a city, a time and an industry he wishes was not gone (in this particular state). That is quite evident as there is an underlying sadness in the film, as well as some foreboding of what is to come (which requires some basic knowledge of what happened to some of the real-life characters portrayed). Dialogue is solid and entertaining, refreshingly not the kind that calls too much attention to itself for being too clever. Leonardo DiCaprio is excellent, balancing the act of playing an insecure actor and a few characters as well. Brad Pitt’s performance is also quite good, with a less showy, more stoic character. Margot Robbie is the perfect picture of joyful innocence. It’s a very large cast, and it’s hard to find a wrong note anywhere. The film looks very good, with both Barbara Ling’s production design and Arianne Phillips’ beautiful recreations of the time. Director of Photography Robert Richardson frames and moves the camera beautifully, quoting many styles of old films and series and making great use of cranes. Fred Raskin’s editing is where the film is a tad self-indulgent; the film doesn’t feel long in general, but some trims here and there would be welcome. Violence is surprisingly rare, but when it comes, it’s furious and a bit excessive. The use of music is unsurprisingly excellent.