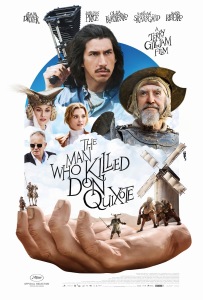 The Man Who Killed Don Quixote: Don Quixote has always been, among other things, about madness and obsession. Terry Gilliam had to go through a bit of both to get this film done (the story of the long gestation of this movie is very entertaining by itself); alas, even if those ideas are represented in the general mood, the resulting narrative is far from cohesive. There are touching and beautiful moments in this typically Gilliamesque fantasy, but they are intermingled with episodes that drag for too long and add too little to the whole. Acting is likewise uneven: Jonathan Pryce is full of crazy energy, also managing to project the humanity and pathetic side of the character; Adam Driver is very uneven, as while the more outrageous moments don’t connect, he makes the more delicate scenes work. Joana Ribeiro is a convincing presence as the ingénue. The film certainly has a good eye for beautiful locations.