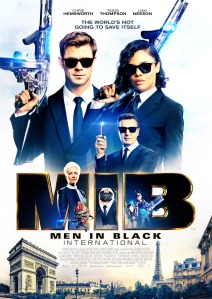 Men in Black: International: it is hard to see exactly the point of this F. Gary Gray entry to the series; maybe his plan, along with the screenwriters, was to just drive it to the ground. The plot per se was never the films’ strongest suit, and that doesn’t change here, as it is bland, unimaginative, shallow. Gone are the sense of humour and the compelling character design seen previously. (Case in point: Rebecca Ferguson’s character. It’s always nice to be graced by her screen presence, but hers may be the dullest alien design of the series.) The chatter is also dull: Tessa Thompson and Chris Hemsworth have proved elsewhere they can have good chemistry, but that is not really evident here at all. Emma Thompson and Liam Neeson are in sleepy auto-pilot. At least, the film gets to show the world-at-large, for a change. The musical score (by Chris Bacon and Danny Elfman) is the high point, fun and recognizable.