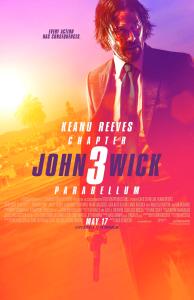 John Wick: Chapter 3 – Parabellum: one of the greatest assets of this film series is that there is no pretense of a real plot, only a sliver to expand the franchise mythology and move from one location to another. Much like in the other entries, director Chad Stahelski manages to keep the gun fu action sequences extremely violent, ultra-kinetic, and developing with great visual clarity. Editor Evan Schiff does that sustaining the shots, with the action moving within the frame. Cinematographer Dan Laustsen does a good job with many-colored lights; the climactic sequence happens in a beautifully designed set that allows for very nice and unique visuals. That said, the action sequences, all of them without exception, go on for too long; each of them has some distinctiveness to them, but overstay their welcome becoming repetitive and tiresome. The returning cast members are fine: Keanu Reeves is a good fit for the role with his dry, tired delivery; Ian McShane and Lance Reddick are always reliable; Asia Kate Dillon is a good addition, while Halle Berry is annoyingly large with her acting (but she does fine with the physicality of the action).