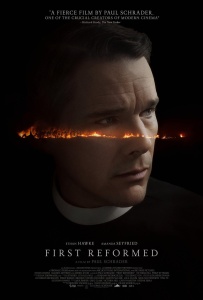 First Reformed: it is appropriate that Paul Schrader’s drama, that tells the journey of a reverend, turns out to be so stern, dry, and rigorous. The film touches on quite a few interesting themes, in a rich and intelligent way; it’s also, however, too dry and detached for its own good, more an intellectual than an emotional journey. Ethan Hawke gives a very fine performance, matching the general tone of the film; Amanda Seyfried is a bit miscast, but even if she doesn’t particularly look the role, she makes up with another solid performance; the entertainer Cedric Antonio Kyles’ performance starts a bit too broad compared to everything else in the film, but eventually settles down. The film aesthetics is toned town to its bone, starting from the aspect ratio and static camera (shot by Alexander Dynan), passing through the minimalist production design, reaching a barely existing musical score.