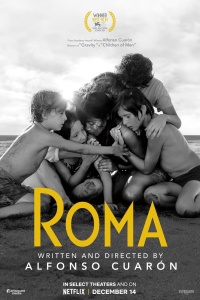 ROMA: Alfonso Cuarón (who also wrote, shot and co-edited the film) has a powerful, richly layered story to tell in this film, one that both is and is not auto-biographical, as it offers a rare (and for that reason, welcome) perspective. That alone would make this an intriguing, touching film, even if it was a less aesthetically distinctive work, but Cuarón’s conception and execution raise it even further. Seemingly informed by the idea that a memory plays out one-dimensionally and sequentially, each scene has very few, if any, cuts (those that do stick out like a sore thumb, but they are thematically justified) and lateral camera movements that reveal the world as the events unfold. Oh, and what superb pans and dolly movements Cuarón pulls off. They call for a very meticulous, precise blocking of the performers on top of the very fine acting; Yalitza Aparicio gives a brilliant performance, sweet and subtle, always extremely touching; Marina de Tavira has a showier role, and she is nearly equally as memorable; the children, as a block, are fine, for the most part avoiding the excessive cuteness of film kids. The film also displays a great sound design, one that hints at a large, unseen world around the protagonist.