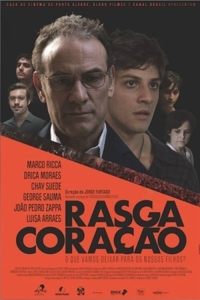 Rasga Coração: it is an interesting, politically engaged film that Jorge Furtado comes up with here; the fact that it revolves around a father-son relationship (or two) makes it stronger, more relatable. It is, however, far from subtle, carrying its “plus ça change” spirit on its sleeve (the editing team makes sure to punctuate, almost ad nauseam, those moments), as well as the idea that every time period will have a cause worth fighting for. Acting is uneven; Marco Ricca is appropriately cold, almost repressed, while Chay Suede is fine but not all that memorable; Drica Moraes and particularly George Sauma, however, are rather theatrical, hammy (the fact that the character may justify it doesn’t make it any less annoying). The film looks OK, but it’s far from special.