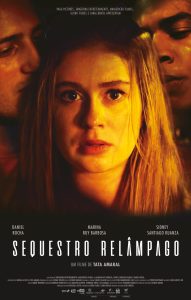 Sequestro Relâmpago: reality can be unbelievable, but a film doesn’t really have that luxury; while the starting point of Tata Amaral’s film is all too real (and, in fact, inspired by real events), the story has way too many unlikely beats. To the film’s credit, there’s no attempt to create any sort of Stockholm syndrome; it’s clear who to side with, even if she (the character played with decent energy by Marina Ruy Barbosa, who projects a certain annoying attitude) makes some dumbfounded decisions. Sidney Santiago Kuanza plays the “good criminal” with the proper dangerous edge, while Daniel Rocha goes a bit over the top with his acting. Truth be told, not much is offered about any of the characters, so there’s only so much the cast could do. Despite the short length, editor Rodrigo Menecucci can’t avoid the film dragging a bit. André Whoong’s musical score gives the film the uneasy mood it calls for. Cinematographer Carlos André Zalasik captures the night of São Paulo nicely.