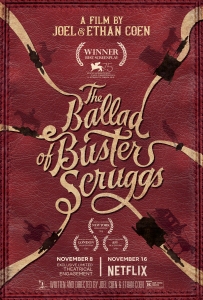 The Ballad of Buster Scruggs: anthology films generally are wildly uneven, but even thought the episodes in this Joel & Ethan Coen film vary tremendously in tone, location, storyline and cast (while keeping just one thing constant: a general Western setting), they are all interesting. Not all of the six episodes are home-runs, but they are all entertaining on their own particular way, and exceedingly well-done. A few of the episodes are more farcical in nature (the Coens are who they are, after all), but all of them still take a hard look at human nature, with generally unflattering results. All of them are shot by cinematographer Bruno Delbonnel, who mixes up a great variety of shots, from crazy close-ups to ultra-wide vistas; the variety of locations is great, and he makes great use of colors and lights to give them even more character. Carter Burwell’s musical score is always on-point, generally raising the melancholy level asked by the stories, but also reinforcing the farce or suspense when needed. Editor “Roderick Jaynes” (or, as they are more usually known, the Coen brother themselves) don’t rush things, as the episodes have a pace that emulates the life at the portrayed epoch; still, when required they create uneasiness and suspense with the shot selection. Acting is delightful (and the beautiful dialogue calls for it more so than ever), even if most don’t get a lot screen time (and because of the nature of the stories, don’t get much of a character arch); to list them all is unpractical, and to list just a few would be unfair to the ones unmentioned. It’s a testament to how good the stories are (and how well-executed this project is) that one wishes the Coen brothers could have told a lot more of them.