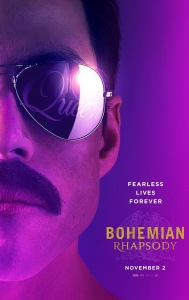 Bohemian Rhapsody: it may well be that the only thing more extraordinary than Queen’s music is their story, but one wouldn’t know it watching Bryan Singer’s film. There is, of course, the chance that the actual story is indeed extraordinary but it was dulled beyond recognition. The narrative is shallow, most scenes are heavy-handed and devoid of any nuances, the insights into the characters or their processes and motivation is null. The only truly emotional moments in the film happen because they are reproductions of well-documented concerts which were (by all accounts) very emotional; nothing in the film itself builds up to them, in particular if the band’s music carries no weight. Rami Malek has a good resemblance to Freddie Mercury, and he mimics well the subject’s mannerisms, but he can’t do much beyond that as he was given only half a dimension of a character to work with. Lucy Boynton and Tom Hollander are OK in their roles, no one else really stands out in any way. Other than the precise recreation of the climatic concert, the film looks unremarkable; one minor quibble, in the grand scheme, is that the aging make-up used for a few characters is rather fake-looking. The music is exactly what you expect, no more and no less; your mileage may vary.