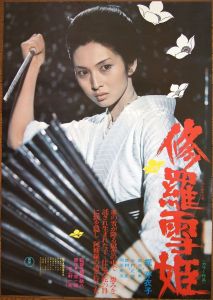 Lady Snowblood: it’s a sad and brutal tale told by Fujita Toshiya’s film, one that doesn’t shy away from its manga origins: it’s violent and its characterizations are mostly flat, but that doesn’t reduce much of its entertainment value. The beautiful Kaji Meiko is the perfect instrumento of vengeance, an embodiment of cold, controlled fury; the effect is greatly enhanced by the elegant kimonos and stern hairstyle she uses. The fight scenes are choreographed for maximum dismemberment and blood-splashing. The fake blood color also makes many appearances in the film’s art and costume design. Cinematographer Tamura Masaki’s images alternate between cheap-looking shakiness and some very beautiful visual poetry, but above all, captures the colorful world well. Hirao Masaaki’s musical score is interesting, curiously all over the place stylistically. Inoue Osamu’s editing gives the film a fine structure, and runs throught a lot of events in a very appealing manner.