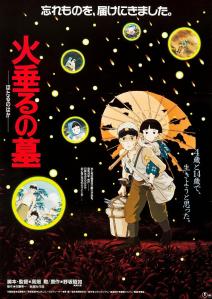 Grave of the Fireflies: it is possible to have magic in an animation film without talking animals or fantastic environments; a great story in a realistic setting will have the same effect. In this particular case, the story is as touching as in very few cases before or since, and that includes live-action films; it is both very particular to its time and place, and universal. While it’s very different in tone to the majority of Studio Ghibli’s films, it retains the most important trait: its profound humanity. Visually, it is dated, but the aesthetics are not the main reason to watch this one; while not an easy seat, this film had an effect in me very few do.

(Word of advice: this is probably not an animated film to be seen with children.)