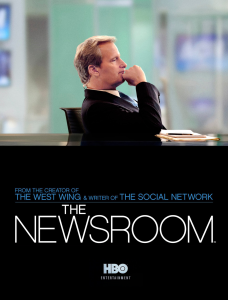 The Newsroom – Season 1: there are many elements to writing in addition to the story; dialogue, characters and structure are the ones I pay the most attention to. The first season fails miserably in one of those: characters, particularly the female ones, are so badly built that it almost ruin the whole experience (romantic relationships are also rather weakly portrayed, which certainly has a connection). Almost. Structure and dialogue, however, are vintage Aaron Sorkin; he obviously loves the sound of his own voice, and definitely uses this as an opportunity to stump; also, he is able to tell stories non-linearly quite well. His dialogues, like them or not (and they are very divisive for sure), allow the actors to shine, and usually they do. Visually, it’s more interesting that I expected it to be, except for the somewhat excessive use of zoom-ins.