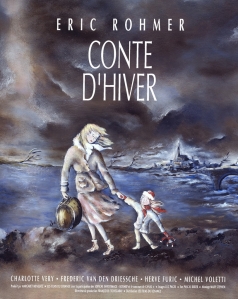 A Tale of Winter: the indecisiveness of Éric Rohmer’s protagonist in this light drama is very impressive: she romantically bounces between two men, while she divulges to the four winds that her true love is a third man, the father of his daughter. Her side of the equation is well-explored since she discusses in detail what is behind her comings and goings; the rationale of her two lovers in continuing to pursue this relationship, however, is not as much. Dialogues are generally very rich and insightful. The performances are in a naturalistic key and are effective in that regard: Charlotte Véry, as the main character, is lively and charming, which gives some credence to the conundrum of her two lovers, played by Michel Voletti and Hervé Furic. The film is well-paced and, aesthetically, it’s simple but more than appropriate to have this tale told.